Safety Exit
You are here: Home / Blog / What’s the Difference Between Separation and Divorce?

Often people ask whether there’s a difference between being separated or divorced – or whether it even matters.  Let’s take a closer look.

Let’s start first with separation – what does that mean?

Separation occurs when two people who are married or living together in a conjugal relationship wish to end their relationship.

Having said that, there’s often things that need to be negotiated soon after a separation happens – things like

Do you have to be living in two homes to be considered “separated”?

Separation can certainly be solidified by physically moving into two homes, but it’s not necessarily the only way to be considered as separated.  Spouses can be separated while living under one roof too.

If spouses want to divorce, most often the “no fault” provision of the Divorce Act will be used – which is you need to prove to the Court that you have been living “separate and apart” for 1 year.

There’s a long list of ways to prove that spouses are separated even though they’re in one home – I’ll list a few to give some examples:

It’s more so about putting all the factors together to determine whether you’re able to consider yourselves as separated while under one roof.

Next let’s turn to divorce – how is that distinguished from separation?

Divorce is the legal act of no longer being married spouses

There’s 3 steps to finalizing the divorce.

The first step is filing the actual claim for divorce itself – I describe this as opening the court file.

The second step is the Judgment itself which involves filing documents with the Court where a judge will sign your paperwork to grant the divorce itself. It doesn’t necessarily involve physically attending court.

There may be a need to go to court if spouses need a judge to decide for them on any given topic relating to their separation, but in the event that everything is agreed outside of court through negotiation processes like Mediation, Collaborative Divorce, or settlement-focused divorce, then the divorce itself is what we call a “desk divorce” which is where everything is simply sent in to the court for issuing, and is sent back all signed by a judge.

The third step is the Divorce Certificate which is issued 31-days after the Judgment takes effect – this ends the appeal period and causes you to no be longer spouses, officially.

I always encourage spouses to worry first about separation, and move to divorce when it’s time for that.  There’s reasons why a person may want to file court paperwork to start the divorce process rolling, but the actual topics to be negotiated do not need to be done through the courts.

In order to grant a divorce, the court will need to know the details of the arrangements you’ve made with your spouse for the kids, the finances, and property division.

That’s why I always have families focus first on the substance of the issues to be resolved, then once completed, we worry next about requesting that the court end the marriage by issuing a divorce.  I see that as the very final step for most families. 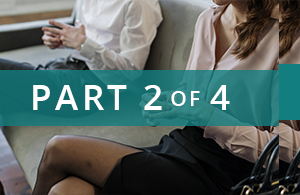